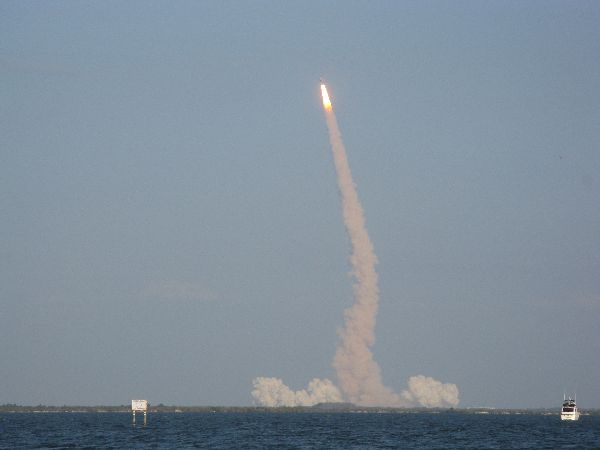 A picture from the final launch of the Space Shuttle Discovery (STS-133)
***This post may contain affiliate links. Also, As an Amazon Associate I earn from qualifying purchases. Please see my full disclosure policy here for more information.

The day was perfect. A bright blue sky surrounded the vehicle assembly building at NASA, which we could clearly see across the water. The February air was warm on my skin, the sun intense on and beating down on the hat that covered my head. It couldn’t have been any better. 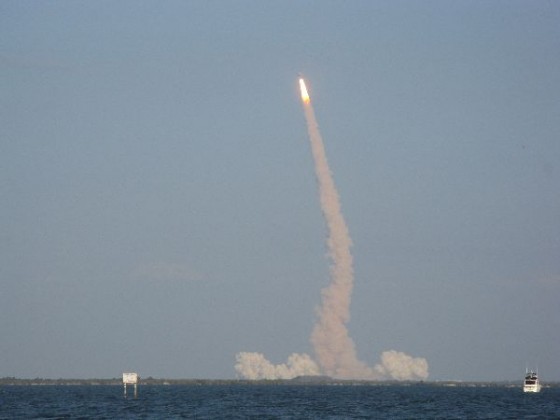 We were so, so very lucky to be in Titusville, Florida on that day to see the last Space Shuttle Discovery launch.  This would be the last flight for an iconic piece of space history. The space shuttle Discovery sat placidly on the launch platform, directly across the water from us.

We had grown up watching space shuttle launches. They had fueled our imaginations, and captured our hearts. I was not quite old enough to have direct memories of the challenger disaster, but I do remember the shock and grieving process that came after the Space Shuttle Columbia exploded upon re entry in 2003. The fleet of space shuttles have left a distinct imprint in the hearts and minds of the American people.

Titusville, Florida is located directly across the water from the launch platform that was being used for the last launch of Discovery. Other than getting lucky and winning a spot by lottery to be on the Kennedy Space Center grounds for the launch, this was about as close as one can get to the launch platform. We were about 11 miles away.

We had arrived quite early in the day, before the throngs of people descended, all hoping like us to bear witness to a moment that none of us would ever forget. For $5 each we secured out place, a front row seat on a dock located directly across from the launch pad.

A space shuttle launch is always an iffy proposition, and due to tight work schedules on either side of our short trip, we knew that we were going to need extraordinary luck on our side. We learned while waiting that it is not only the weather conditions at the launch site that are evaluated and need to be right for a launch to take place, but that the weather conditions at emergency landing sites all over the world all need to be perfect.

We also knew that the launch had already been postponed a couple of times in the previous weeks because of various factors. We took all of this into account during our six hour long wait on the dock, wondering whether all of the conditions would be right for the anticipated launch later that evening.

We had been able to tune into the radio signal being broadcast directly from mission control and were jubilant to hear that all of the pieces were successfully falling into place, and that conditions might be right to try. The level of anticipation and excitement was growing as it was shared by the thousands of people around us hoping to see a launch. The excitement was almost palpable, like a buzzing in the air.

The hours were counting down. The radio chatter form mission control became more regular as they began the long list of pre-flight checks that would hopefully lead to a successful launch.

From what we could hear, everything was going surprisingly smoothly until shortly before launch time, when a problem with a computer monitor arose. When you hear about technical issues that cause a space shuttle launch to be postponed, one imagines complicated, impressive sounding problems. It was hard to believe that something so simple as a malfunctioning computer monitor could be jeopardizing all of the hard work that had gone into today’s attempt.

We all waited anxiously, holding our collective breath, waiting to see if it could be fixed. Time ticked down. Attempts to fix the problem were failing. They were given five additional minutes to see if a solution could be made, but the time could be extended no further as they were in danger of loosing the precious launch window with any further delay.  10 seconds left in the time extension…then 5…we were beginning to brace ourselves for disappointment.

Suddenly, a cheer rose up as those of us who were able to hear the radio shared the news that the problem had been fixed, and that the countdown to launch had been reinstated. Long hours had ticked down into minutes, and then into seconds as we listened to the last 10 seconds of the long wait that led to main engine start and the launch.

She took off across the water on a column of fire, the huge cloud of steam billowing out across the ground around the launch pad. The huge shuttle with its massive fuel tanks soared across the sky faster than I would have thought possible, becoming smaller and smaller as it neared the outer reaches of our planetary atmosphere and its position in orbit around the earth, on its final mission to meet up with the International Space Station to deliver needed supplies and parts.

Underneath the thrill and awe of seeing a successful launch, there was a palpable sadness. The Space Shuttle program that had become such an iconic part of all of our lives was coming to a close.

While it is being replaced by other means of space travel, the space shuttle program has been, since its start with those iconic words spoken by John F. Kennedy, a source of pride for the American people. This pride and the sadness for the end of an era was keenly felt as the excitement of the launch quieted and settled into a deeper place in my heart.

The people who live in Florida felt this the most acutely, and we could sense it as we walked around town waiting for the crowds to clear out. They were very proud to be a part of such an incredible legacy, and there was a lot of uncertainty about what was coming down the pipeline to replace the aging space shuttle program.

NASA’s many contributions to space exploration, including the Apollo missions that led us to the moon and the space shuttle program which played a key role in building the International Space Station have secured our place as space pioneers. Where we go next is only limited by our imaginations and ambition.

One Day In Boston