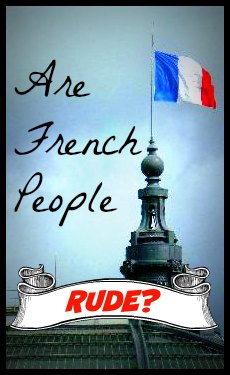 If you enjoy my writing, please check out some other pieces that I have written about France and travel:

Nearly everybody that I have talked to that has been to France tells me that they found the French people rude, short or stuck up with them.

My sampling pool for these opinions include rookie travelers as well as veteran travelers, so the amount of experience that you have navigating the cultures of the world seems to make little difference in this judgement.  Are French people rude? 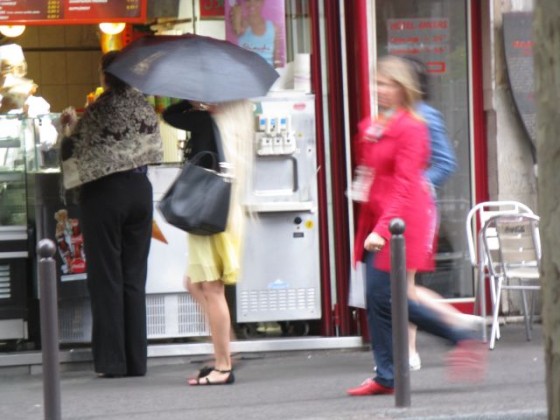 In our travels in France, not one single time did find the French people rude with me or anybody in our party.  In fact, the people that we did encounter went out of their way to help us in any way that they could.

Come on, what’s not to love about french people?  They have that cool pointy tower, amazing food and they do that cheek kiss thing that I think is so cool!

I think that the number one reason that my experience differs from so many other people who have been to France is because we made an effort to fit in.

Now, this seems like it should be an obvious thing that you would try to fit in when in a foreign country, but this is not always (or even often) the case when it comes to many American travelers that we see in other countries.

Language is a big part of this strategy.  I feel like it is important no matter where you travel that you learn some basic words in the local language.  It helps you to tear down the walls and build bridges between you and the locals.  This is particularly true in France.

French people are very proud of their language (and they should be, it is a beautiful language that oozes romance from every syllable).  The French pride in language seems to go beyond just their language, but extends to their ability to speak other languages as well.

French people tend to be perfectionists at language.  If they can’t do it 100% right, they are hesitant to try.  I asked many French people on our trip, “Parlez Vous Anglais? (Do you speak English?)”

Most of the time, I got a timid “Un Peu (a little)” as a response.  I then discovered that most of them spoke and understood a good amount of English (or at least enough for them to figure out what I needed and for them to communicate a reply.)

Now, the French don’t extend this expectation of perfectionism on those from other countries, but they do want you to fumble with a little French first before they feel comfortable pulling out their fumbling English.  You are in their country, so this is a completely appropriate expectation for them to have, in my opinion.

Once you embarrass yourself a little first (even if all you can say is “Bonjour.  Parlez Vous Anglais?”), they will pull out their English which in most cases is much better than they think it is (that perfectionism thing again) and you will meet somewhere in the middle of the the street labeled communication (which is a two way street, by the way).

Most of the French people that I met were just so happy that I was even trying to speak their language that this instantly made them warm and helpful and willing to treat me more like a friend and less like a tourist (and I often got help with my pronunciation and with words that I didn’t know in the process.)

The other issue that I think many people have with their view of the French people has to do with an expectation that we are placing on our interactions with them that is based on the type of warmth and greetings that we expect out of our interactions here in the United States (which is not necessarily the way that things work in France.)  In the United States, it is normal for us to smile at strangers as we walk down the street and to be super friendly and warm to people that we do not know.

As far as I can tell from my travels and books that I have read, French people reserve this type of warmth for close acquaintances, friends and family (I am not sure if this is true, but I have been told that French people thing Americans are somewhat silly walking around with a huge grin on our faces all the time.)

In many countries in the world, walking around with a big, happy American style grin on your face can get you into more trouble than just a cold welcome.

The French just reserve their smiles for people and things that make them really happy (and further,  in France if you smile at a stranger of the opposite sex, it means that you are flirting with them and they will interpret it as such and react accordingly!)

So, when you meet a French person on the street, try viewing your interaction through a different lens.  Just because they are not smiling and SEEM slightly short with you does not mean that they dislike you in any personal sort of way.  They do not know you.  They are probably happy to help you, but don’t expect the same kind of smiles and warmth that you would in America.

I find the attitude of the French refreshing.  In many ways, this attitude makes them more real an authentic to me.  We spend so much time and energy here in the United States looking happy, smiling, making small talk with people that we don’t really know because that is the polite thing to do (particularly here in the Minnesota where the “Minnesota Nice” thing goes a little overboard sometimes.  I mean, come on, how much idle chatter about the weather can we really do?)

The nice benefit to this lack of small talk (and another reason why Americans often don’t fit in in France) is that public spaces in France (trains, malls, buses, etc) are generally remarkably quiet, which is also quite refreshing.

When I was able to crack the cultural barriers with people by being a respectful tourist and meeting in the middle with that language thing, I had all of that warmth that had been previously lacking in out interaction returned to me ten fold.

BTW: I have it on good authority that if you are invited into a French person’s house, you are generally considered a friend (French people tend to be very private about their personal lives).

Are French People Rude?  Should You Travel to France?

If you have been thinking about a trip to France but have been turned off because of the stereotypes that you have heard about the people in France, I hope that this post helps to change your mind.  The people in France are warm and welcoming (even in Paris) if you give them a chance to be.

Alojamiento Rural la Montaña Mágica, Llanes Asturias – The Most Beautiful Place that We Have Ever Stayed

How to Get From Lucerne to Mount Rigi by Boat: An Easy Daytrip from Lucerne Switzerland

How to Travel to Nice France on a Budget